Today we would follow the route our Grandad took when he landed on the 12th June 1944. Our alarm went off at 6, giving us time to pack the campsite back onto the bikes. We were on the road by 07:30 needing to backtrack up to the beach at Arromanches-les-Bains.

I can’t quite remember where we went when we were waiting for the invasion. Some of the time I think we were at St Georges Golf Course at Sandwich. As time got near we were all busy waterproofing the engines of all the vehicles, so that when we drove off the landing craft the engines wouldn’t stall if they got wet. We went on D+6 and the whole channel was full of landing craft. We landed at Arromanches and were able to drive straight off and the tanks had already laid a wire-mesh road. 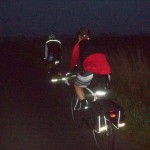 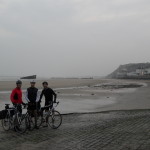 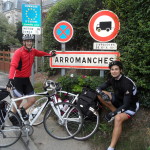 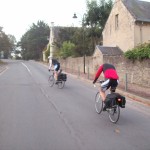 Once again the low early morning light and rolling mist lent an eerie atmosphere to the scene. The remains of the Mulberry harbours still line the edge of the bay. We touched our wheels to the beach and set off along the route Grandad had penned 69 years earlier; inland to Ryes and then down to Villiers-le-Sec.

We camped in a small village, Villiers-le-Sec, in a farm orchard. I shared a tent with the Instructional Gunner. We all did a spell as duty officer at night, just manning the phone. Things were held up at Carpiquet Airport at Caen. Caen itself was very damaged. We acquired a French liaison officer from Caen and later on a Dutch liaison officer who had worked at the Phillips factory in Eindhoven. 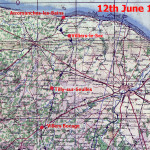 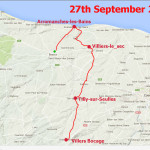 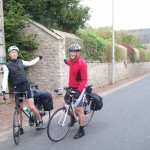 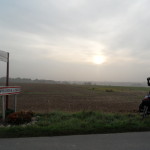 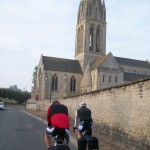 We found an orchard in Villiers-le-Sec. We’ll never know if it was the orchard Grandad stayed in but… close enough. We nabbed a few photos and cycled southwards. The roads in Normandy were a pleasure to cycle on. Potholes and angry buses were a distant memory from furious commutes a million miles away. That said, the gently rolling landscape was deceptively tiring. With the bikes loaded up with tent, kitchen sink and hairdryer, the longer upward stretches became a slog. I began to wane on the stretch from Tilly-sur-Seulles to Villiers-Bocage, but thankfully my comrades did too, so we pulled in to re-tank (coffee, orange juice, pastries).

We went quite a way south to Flers and then turned east so that we were going right round Caen.

So we faithfully did the same. Montgomery had hoped Caen would be captured on D-Day itself. In reality, it saw some of the fiercest fighting in Normandy and didn’t fall until over a month later on 9th July.

We pedaled on eastwards past Flers but the relentless climb then coast, climb then coast was energy sapping. And no more so than on ‘The Hoys’ (Joe’s unnaturally tree trunked legs). In hindsight, we perhaps should have popped into Flers for some lunch, but we were overly eager to yomp through the miles towards the next campsite in Argentan. Then we totally ran out of fuel for The Hoys. No energy gels, no water; nothing. We pulled off the main road and studied the map. ‘Landigou’, ‘Durcet’, they seemed reasonable options for sustenance, so we nosed off our planned route into the countryside. We quickly discovered these were just locations on a map which coincided with a road junction or farm but no promise of a pâtisserie, boulangerie ou marché.

Returning again to the map, we fixated on Briouze. With a slightly larger font face this surely would yield at least a croissant. Crawling the last 5 miles into Briouze, Joe’s legs were running on fumes.

Result! There was a café; La Squadra du Hazé.

I walked into the cafe. A large table of French men who had been nattering immediately stopped to eye the lycra clad intruder. A waitress appeared from behind the counter.

“Oh.” The norms of French service once again got in the way. Being lunchtime, all the cafés were closed for lunch (unless you were local).

I walked back out to Joe and Lew who were optimistically dismounting the bikes.

“Sorry guys, they’re closed.” I wasn’t sure how we were going to nurse Joe the last 20 miles to Argentan without food or drink.

Then, “Monsieur!” I turned, and the waitress was back. “I can make you a baguette?” I must have looked so crestfallen that she took pity on me. We threw words like ‘grande’, ‘jambon’ and ‘fromage’ at her, and sure enough a few minutes later she brought out 3 large ham and cheese baguettes. It was possibly the best ham and cheese baguette Joe had ever eaten, and certainly the most necessary.

We finished up and headed back to the main road. We immediately happened across a large supermarket. Cue a load of pastries and orange juice. With our energy levels resumed we covered the last 20 miles to the campsite at Argentan. 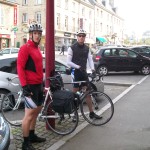 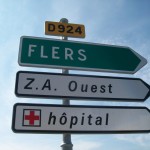 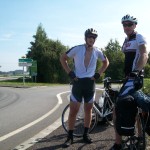 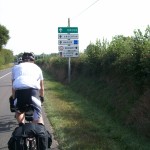 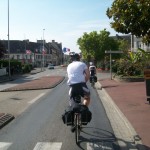 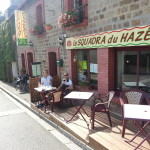 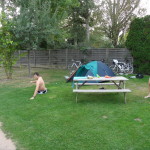 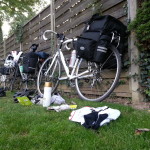