Is your life missing that certain something? A large pie shaped hole that only one thing can fix? Yes! You need Munters. Call Munters now for all your Muntering needs. One call and we can have a fresh Munter delivered direct to your door!

Stopped off in a place called Noosa. This is where I had my first drowning, sorry, surfing lesson. This shows the instructor showing Andy and myself how to ‘pop-up’ on the board. I usually save that kind of activity til no ones around. 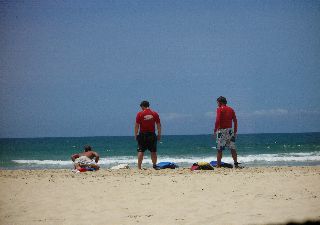 Almost look like I know what I’m doing. The other 90% of the time I spent swallowing sea water. 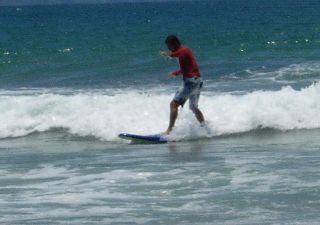 After Noosa we travelled down to Brisbane. We happened to be there at the same time as the Ashes. The guys wanted to go down to the Gabba just to check things out. I agreed to go there with them, what with me being a big sports fan type of guy. We walked through Brisbane – a nice place by the way – and strolled across the bridge over the river. Two thirds of the way across I see a girl, of noticeable hotness, walking towards us. As we pass I attempt a casual “I’m just taking a stroll” kind of smile, expecting – at most – a “yes, I am also walking” kind of smile in return. But no. No siree Bob. She laughs. Not just a chuckle but a proper “are you some kind of circus act?” guffaw. I was a little taken aback, but guessed she must have confused me with something hilarious. Lewis and Rosey said it was because I was a retard.

A little further on an Aussie guy passes us. “You guys going to the cricket?” he says.

“Uh, not really, just walking down there.”

“Well, I got these two tickets, you boys can have them.”

Woah. So we ended up watching some cricket. 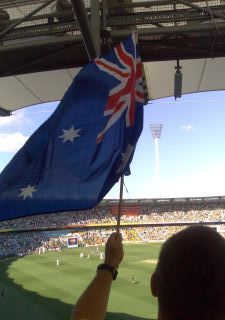 I had no idea what was going on, but it was cool all the same. You can’t actually see the ball; it looks like they’re just miming cricket. 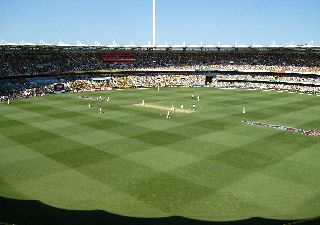 The English were getting pasted but the atmosphere was good. That evening we went out in Brisbane but it was a bit of a sausage fest (the Aussies shorten it to ‘saus’, pronounced ‘soss’) presumably as the cricket was on. That evening I went on a bonanza when we got back to the camper and made a million peanut butter and jam sandwiches. Lewis and Rosey do not like this combination so Andy and myself ate them all. It was great.