Search
Categories
next ›
0
Down and out in Montpellier
August 6, 2005 admin Travel

Saturday night in Montpellier. This was the big one.

There was one draw back though. I had noticed a sign suggesting the hotel had a 1am curfew, hardly what you need for a night of hardcore canoodling. I decided to ask the receptionist.

“One o’clock.” Came the response in English.

Humbug. Resigned, I started to turn back to the room.

“Would you like to stay out later…?” The guy behind the desk gave me a knowing smile.

It turned out that there was a secret late night door with a secret code and more importantly that I was now privy to this information.

My spidey sense was tingling, and I let Wystan know, “Dude, I have a good feeling about tonight.”

We had no plan but we had faith. We wandered the old town for a while, chose a restaurant and took a seat.

“Do any of these look like they don’t have meat?” said Wystan flicking through the menu of Café Moderne.

“Umm…” I was busy working out which wine was most likely to give me brain damage, “I’m not too sure.”

Wystan asked the same question of our waitress. She looked at him as though he’d asked if there was somewhere local he could get a gorilla serviced. Clearly his Frenglish wasn’t cutting it. She turned to another waitress, “Sophie!”.

Half way through food we decided it was time for a team talk. I decided to put my case forward. “Right. Things haven’t exactly been going to plan.”

“Well, every time we think we’re getting somewhere, we manage to balls it up.”

“Mm. True. I think. I think if it looks like we’re about to make a stupid decision we should take a step back, realise we’re about to do something stupid and then not do it.”

The idea was just crazy enough to work.

We knew Sophie was a good place to start a fresh.

“So, if we wanted to go out in Montpellier, where would you go?”

I was expected a couple of suggestions and some vague finger pointing.

“You guys have got to go to this Irish pub, it’s my friends last night working there, they’ll be having a bit of a party. It’ll be great!”

Woah! I gave Wystan that secret acknowledgement using only my face that us guys think only we know about but in fact anyone who can distinguish arse from elbow can see. She pulled out her notepad and scribbled a note: Hi Katie, please welcome these two gentlemen. Love, Sophie.

“And whereabouts is this pub?”

Her vague finger pointing suggested it was somewhere in the Northern Hemisphere. We weren’t going to let this one slip through our fingers, so she drew a map and collected our plates. I was confident but needed reassuring. “Ok, we’ve got a map to get us there and a note to get us in. Our bases are all covered and we’re not doing or about to do something daft?”

Wystan thought for a moment and then nodded, “We’re good, let’s go.”

Clearly geography had not been Sophie’s best subject at school but with a little guesswork we found the Irish pub. It had been cunningly named ‘Irish Pub’ so the sign over the door gave it away. We entered and were pleased to note a large fraternity of hot girls of various nationalities sitting and chatting near the bar. We asked for a drink and got the barman to fetch Katie from the other end of the bar. I handed over the note, “So your last night, eh? Having a good party?” She looked at the note, looked at us and then back at the note. She seemed a little taken aback. I had seen the note and was fairly sure it didn’t ask her for an evening of S & M so was unsure how to read her reaction. A ‘hi’ was all we wanted but we let it drop and turned our attention to the girls.

We perched ourselves as close to them as humanly possible without physically touching them and then hoped osmosis would take over. After 45 minutes and few beers I could see it was clearly not working. “It’s been 45 minutes, it’s clearly not working!” Stating the obvious is a problem I have. “I’m going to the toilet.”

So the foot was firmly wedged in the door and we were being accepted into the group. The party and in fact the whole bar from bouncer to barman was moving onto Montpelliers most happening night spot, ‘Le Fizz’. “Are you two guys coming?”

It would have been rude not too.

I decided I needed to talk to hot twin else I might combust. “Hi.”

“Hello.” This was a good start. We got talking, exchanged names and nationalities. She was from Finland and spoke with a soft American accent. We got talking about all that stuff you talk about on nights out but can never remember the next day and, I like to feel, we seemed to hit it off. “Wyst, I think, err, I might be in there.” He gave be some encouraging words of advice which I promptly forgot and I returned to the game. She was buying me drinks, I was buying hers. I got coke on her jeans but she didn’t care. I was in the zone, combining my two favourite recreational activities; girls and alcohol. I could scarcely believe it but things were going well. “I think we should go and dance.”

We were on the dance floor and all was well in my world. This is when it happened.

I don’t know. I don’t know if someone bumped into me or if I slipped or divine intervention stepped in to unleash some smack down. Whatever the causes it was the end result that mattered. Hot foreign twin girl took a tumble. That in itself may have been salvageable if it wasn’t for the concrete step her head was sailing toward. Crack. All of a sudden I wasn’t her favourite guy anymore.

Minutes later Wystan came down the stairs to the dance floor to find me rocking back and forth in a corner.

“I don’t want to talk about it.” A few moments later I told him all about it.

I left the club to find my former friend sat outside still clutching her head. I opened my mouth but I realised words were useless; this game was over. We made our farewells to the rest of the group, got a good bye photo from Sophie and headed home to our double bed. 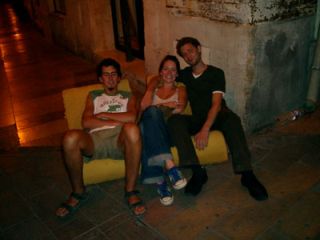