We’ve been in Railay. I’m fairly sure it should be called Is-Railay. There’s lots of holidaying Israelis. It seems there’s never a good time for my ‘two Palestinians walk into a bar’ joke.

We did some rock climbing, which was proper bo, I tell thee. There’s quite a wacky backy culture that goes with it, it seems, and we were a bit worried about how many special cigarettes our instructor might have had before putting our lives into his hands. It was unfounded though as the chap was just happy and laughed regardless of any mind altering drugs. His name was Khop and he was an amazing climber. 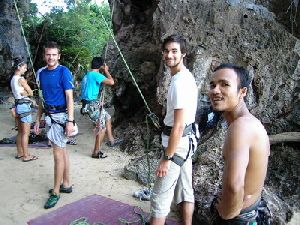 We also climbed up 1,237 steps up some mountain or other (near Krabi town) to see a Buddha statue on top. If there’s one thing Thailand is big on, it’s Buddha. 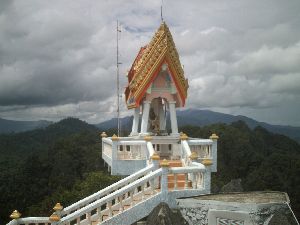 We’ve moved down to Ko Phi Phi, a place that’s being rebuilt since it got decimated by the Tsunami. Rented a TriYak today (essentially a kayak but for three) and took to the oceans blue. We went off to claim some land for Queen and country, but I didn’t have a flag to stick in the ground. Whilst on our maiden voyage the sea turned rough and the thing flipped. It was proper dangerous, all our supplies, the oars and us were the sea. Lewis and Rosey set the thing upright and I swam about for the flip flops. Unfortunately the current dragged our water bottles away too quickly, and we had to abandon them. By now they’ll probably be floating past Phuket.

I will finish with a nice sun set picture taken by the Big L. 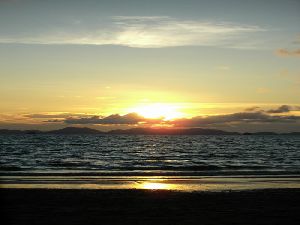